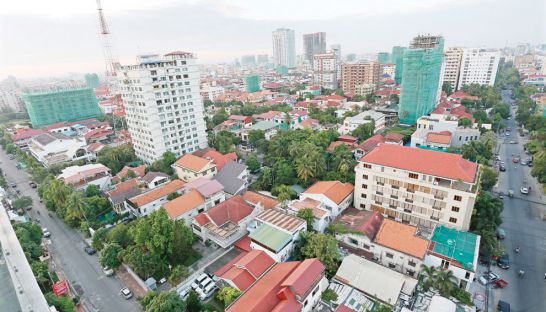 Apartments are continuing to spring up across Phom Penh. At the same time, overall occupancy rates are on the decline. Hong Menea

The number of apartments in the market is increasing, making the competition tougher than ever. Nonetheless, the occupancy rate in Phnom Penh remains below the mark.

Based on a recent study by Bunna Realty Group, there were 292 apartment units in the market in 2016 – equivalent to 7,700 units, representing a 21 percent increase on the same period in 2015. There were 58 completed condo projects with a total supply of 5,400 units entering the market.

Sung Sina, head of research at Bunna Realty Group, said via phone on Monday: “The drop in occupancy rate is because of the oversupply in the apartment market, but it is not a risk in this sector.”

However, data from Bunna Realty strongly contrasts that from Century21 Cambodia, which found that the number of completed apartments entering the market last year was 220, the equivalent of 25,000 units, compared to only 184 apartment buildings in 2015.

Chrek Soknim, CEO of Century21 Mekong, said the apartment occupancy rate is around 85 percent in the midst of this tight market, which makes developers opt to employ real estate management companies to reap benefits from the situation.

“Apartment rental prices have not gone down. It has been stable since 2015 until late last year,” Soknim said. “There are more foreigners entering the country, such as Chinese, Korean and Japanese. Also Cambodians, more and more, are choosing to live in an apartment.”

According to Van Chanthorn, CEO of Town City Real Estate, the increasing number of condos in the market does not put pressure on the apartment market because of the different target groups each building focuses on.

“I have never seen any risks in this sector, because every time a new apartment building enters the market, it is fully rented,” he said. “Apartments have popped up in almost every commune, but the districts with the most apartments are still Chamkarmorn and Daun Penh.”

She added, “We haven’t seen a decrease in rental prices from 2015 to 2016 just yet, but this year, the price might decrease slightly due to more new supply.”

According to Ann, monthly rental fees of grade A apartments, which can be found in Boeung Keng Kang 1, cost around $1,500 for a one-bedroom.